Anthropologists tell us, and we generally agree, that important life passages are more easily assimilated when accompanied by a ceremony or ritual, a rite of passage. North Americans celebrate some of these pivotal moments like graduation and marriage. Another common example is the Jewish tradition of Bar Mitzvah. I’m sure you’ve also heard that some southern States still celebrate the coming of age of teenage girls with Debutante parties. But when it comes to birth, North Americans have startlingly few traditions for welcoming a new baby and marking the crossover from coupledom to parenthood.

There is, of course, the Baby Shower, gifts and visits from friends and family. Otherwise, we have so little to mark this passage that anthropologists and feminists alike have taken to examining the practices in our hospitals, within our medical model of birth, as cold and clinical as these are, as our North American rites of passage. Perhaps it is our roots in the Victorian era and Puritanism that have robbed us of our dances, our songs, our ceremonies. Perhaps it is our collective tendency towards secularism that has taken the spiritual out of the celebration of birth. Or perhaps it is our fascination and absolute belief in science, medicine and technology that has lead us away from superstitious rites to ward off evil and wish good fortune on our young.

Whatever the reason for our lack of clear birth rites, we are increasingly aware that becoming a parent, especially for the first time, is a period of intense upheaval, growth and change as we shed the status of individual (albeit temporarily) and take on the role of caregiver. It is the ultimate lesson of adulthood to put aside the ego in favour of our offspring and to fully examine ourselves in the hopes of being a positive role model. And we are beginning to see that we are sadly deficient in traditions to mark this tumultuous time. A look at some of the rites of other cultures and times will give us some inspiration for creating new traditions of our own.

The first words a baby born to Muslim parents will hear is the Muslim call to prayer (the adhan) whispered in the right ear by his or her father. The baby’s first taste should be something sweet and the parents will chew a piece of date and rub the juice on baby’s gums. On the seventh day, the baby’s head will be shaved to show that the child is a servant of Allah.

The baby is welcomed into the world with the jatakarma ceremony. The father will place ghee and honey in the baby’s mouth and whisper the name of God in the child’s ear. On the eleventh day, the baby will be dressed in new clothes for the naming ceremony which will often include songs, a feast and sometimes a fire sacrifice. 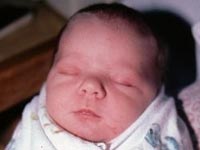 The father must prepare and serve a traditional coconut dish by himself for the mother to eat immediately after the birth, as her first sustenance. The most important part of the “passage” is for the mother to plant the placenta in her family’s land to assure the child that he is heir to the land of both parents’ families and to welcome the baby to our world.

Once the mother is well enough to move about and have a bath, the family and friends go to a Gurdwara with a sacred pudding to sing hymns of joy and thankfulness, read holy texts, name the child according to custom and to share the pudding.

According to the ancient text, the Book of Rites, the baby would be named in the first few days and the new father would report the news to friends and family, especially his wife’s parents, whom he would bring a red egg. When the baby was three days old there would be a special bathing ceremony. Visitors would bring gifts with symbolic meanings and the host would serve noodles and cakes.

In the 1890s, a Zuni Indian mother would birth surrounded by the elder women in her family and after the placenta was delivered, her grandmother would throw it in the river to be washed downstream. After six days, the new baby would be introduced to the Zuni gods and become an official member of the community.

When a Quiche woman learns of her pregnancy, she goes with her husband to tell the elected leaders because the child will belong to the whole community. The leaders help to choose second parents or grandparents (abuelos) who will help the child to follow in their ancestors’ traditions. The community will bring the woman small gifts everyday and she will tell them her problems. After the birth, the new baby and mother will be left alone in a special place for eight days; her only visitors will be those who bring her food. This is the time for the baby to become integrated into its new family. There will be a fiesta for the family and then the neighbours will begin to visit bringing food for the mother or gifts for the baby. After this, the house will be cleaned, new clothes will be put on the baby and candles will be lit to show the baby his home.

A midwife would assist the labouring woman and delivery would occur at home because it was believed that the baby’s first cry was one of loyalty and respect for the parents and should be heard at home. Other women would stay with the mother to offer support and encouragement. After the birth, the baby would be bathed and prayers whispered in the baby’s ear. The baby was given to its mother to be introduced to the grandparents. The placenta was washed and put in a pot to be kept near the mother until it was buried in the ground after 40 days.

Some common threads in the various birth rites around the world are:

Lastly, it is worth noting that many of the traditions are careful to address the event both in terms of the private family significance as well as the public community significance.

There is a resurgence of interest in creating positive and lasting birth rites in our culture and I was very fortunate to experience some of these. We attended prenatal classes based on the book Birthing From Within. During these classes, we covered the usual (stages of birth, breastfeeding, etc.) but we also created art together, had our feet rubbed by our partners and broke into groups (women only and men only) to discuss our fears and expectations.

We also learned about a Food Train. A designated friend would be responsible for organizing a list of people to create meals for the new family and either delivering them ahead of time to put in the freezer or dropping them off every three days. Depending on the number of people involved, the new family can go for as long as a month, knowing that dinner would be taken care of every third night. Our friends organized a food train for us and it made our first weeks with a newborn infinitely easier. It was also a wonderful encouragement to see the outpouring of love and support from our community.

The absolute highlight of the weekend was the Sunday morning when all of the mamas surprised their partners by bringing in items from home representing the father, the mother and the baby and explaining our choices to the class. It was a lovely, thoughtful and emotional morning and such a positive experience to witness each person open up with relative strangers and share their hopes and fears about their upcoming passage into parenthood.